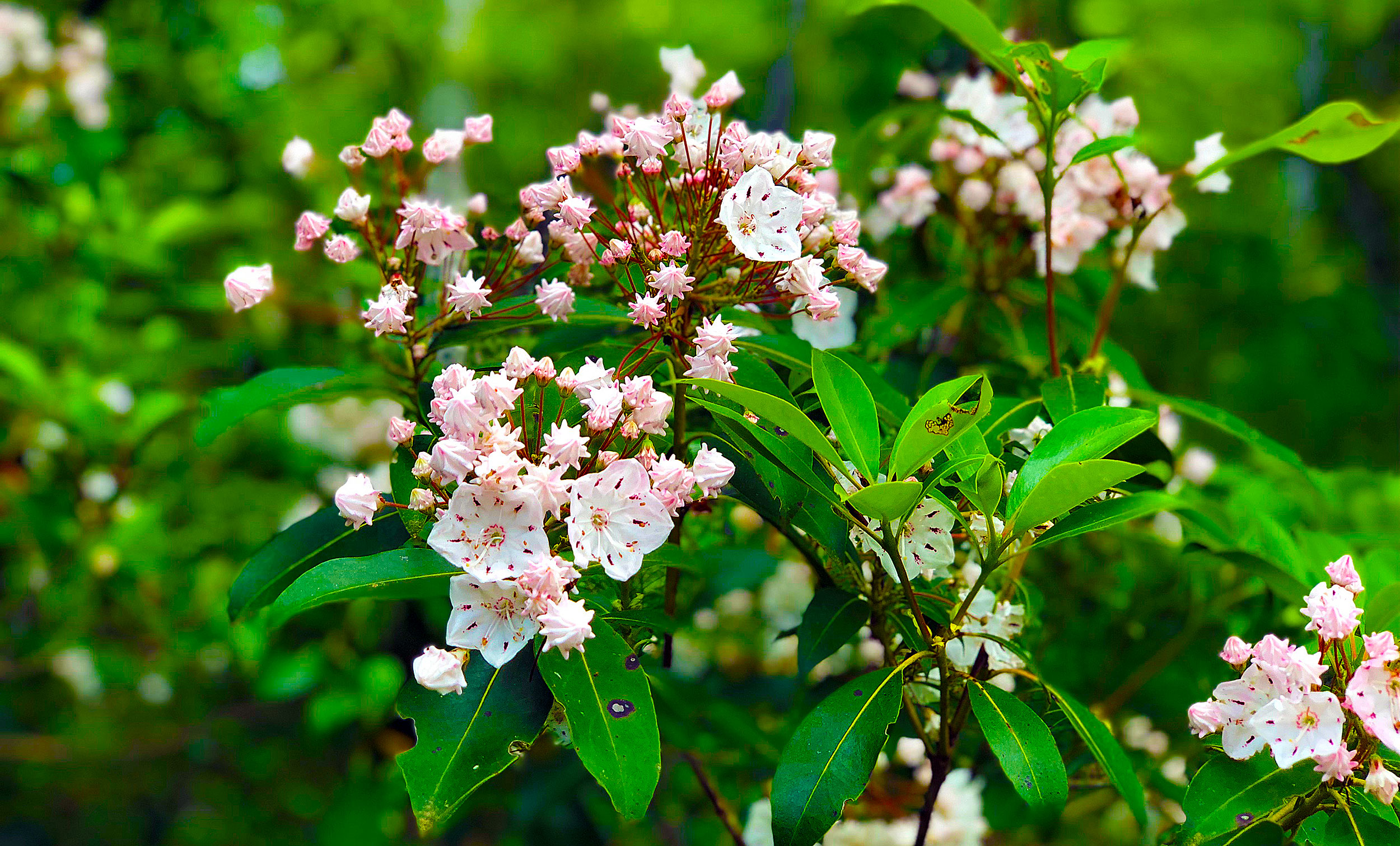 Each year, in the final week of May or the first week of June, something spectacular happens: an explosion of white flowers, with shades of red and pink, that bring otherwise bland landscapes to life.

Mountain laurel is in bloom, and in areas where it grows profusely, the flowers are almost countless — tens of thousands of them, in some instances, coloring the landscape.

Mountain laurel is prolific in many parts of the eastern U.S., found from Maine all the way to the southern tip of Florida, but no further west than Middle Tennessee. In fact, it is rarely found once one has traveled west of the Cumberland Plateau. But in the Big South Fork, it is found in abundance.

The plant — which grows larger in the southern Appalachians than anywhere else — has few redeeming qualities. Its leaves are poisonous and its wood doesn’t grow large enough to be of commercial value. It isn’t widely valued for its aesthetic beauty. Its roots are fibric and matted, making it difficult to eradicate or transplant. And it grows in thickets, so nearly impenetrable that it is referred to in some areas as “laurel hell.”

But when it is in bloom, it adds an entirely new dimension to the landscapes of the Big South Fork — creating picturesque backdrops that immediately capture the attention of photographers, and yet photos cannot possibly do it justice. 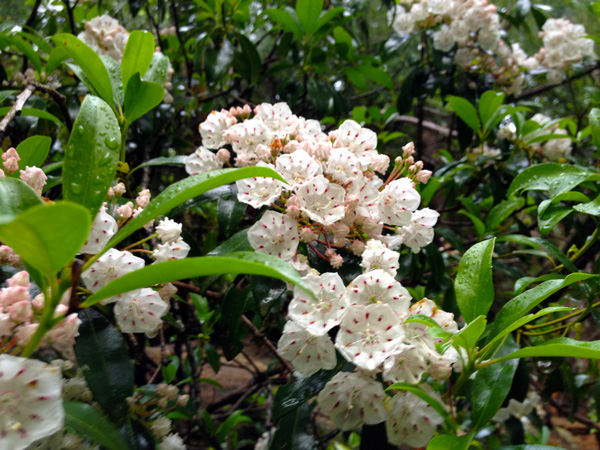 If you’re looking for blooming mountain laurel, you can find it on rocky slopes and forested mountain areas. It thrives on acidic soil, with a soil pH above 4.5 but below 5.5, allowing it to grow in abundance in landscapes where other plants sometimes have difficulty becoming established. It doesn’t require as much shade as rhododendron, which is why the two plants usually grow in different areas. It also doesn’t need particularly wet soil to grow, although it grows more sparsely where there’s less soil moisture available.

In the Big South Fork National River & Recreation Area and surrounding areas, mountain laurel is usually found on the plateau above the gorge, but is especially abundant just along its rim and, in some places, depending on the direction the slope faces, just below the rim. By contrast, rhododendron isn’t often found outside the gorge, except along shaded stream drainages. Inside the gorge, however, rhododendron is much more plentiful.

With that in mind, the best places for hikers or horseback riders to find blooming mountain laurel are along trails that visit the rim of the gorge. There are exceptions; a stretch of the John Litton Farm Loop Trail along Fall Branch contains a vast growth of laurel that looms over the trail and creates a phenomenal “funnel” of blooms in early June. But, for the most part, mountain laurel is most abundant along trails like the Grand Gap Loop Trail and the portion of the John Muir Trail that traverses the edge of the gorge between Grand Gap and Laurel Fork.

Of course, mountain laurel can be found almost anywhere along trails that near the rim of the gorge, but there is perhaps nowhere better to see it in all its blooming glory than along the Leatherwood Loop Trail, just inside the east entrance of the national park off S.R. 297.

Whether hikers choose to begin the 3.5-mile hike at the East Rim Trailhead or the Leatherwood Ford Trailhead, the loop trail is best hiked in a counter-clockwise direction.

The south side of the loop is a perfect example of the differing terrains, forest types, and choice growth areas for rhododendron and mountain laurel. After the trail departs the John Muir Trail that links Leatherwood to O&W, it switches back several times and climbs the side of the gorge. Near the top of the gorge, the trail enters a creek drainage that is heavily shaded by hemlocks, big-leaf magnolia and other varieties, and rhododendron is plentiful. Then, the trail leaves the creek drainage and climbs over the lip of the gorge rim, and suddenly hikers find themselves in a wonderland of laurel blooms.

Tens of thousands, maybe hundreds of thousands, of blooms shower either side of the trail in one of the most magnificent stands of laurel found anywhere in the BSF region. This would be what some southern Appalachian residents refer to as “laurel hell,” and you certainly wouldn’t want to wade into it, but from the trail it paints quite a picturesque scene — one that makes the climb from the river to the top of the gorge well worth the effort.

In another week or so, the laurel blooms will begin to fade. After that, rhododendron will bloom. But there is no better time to hit the trail and take pictures than right now.