‘Possum Trot’ is the set for music video 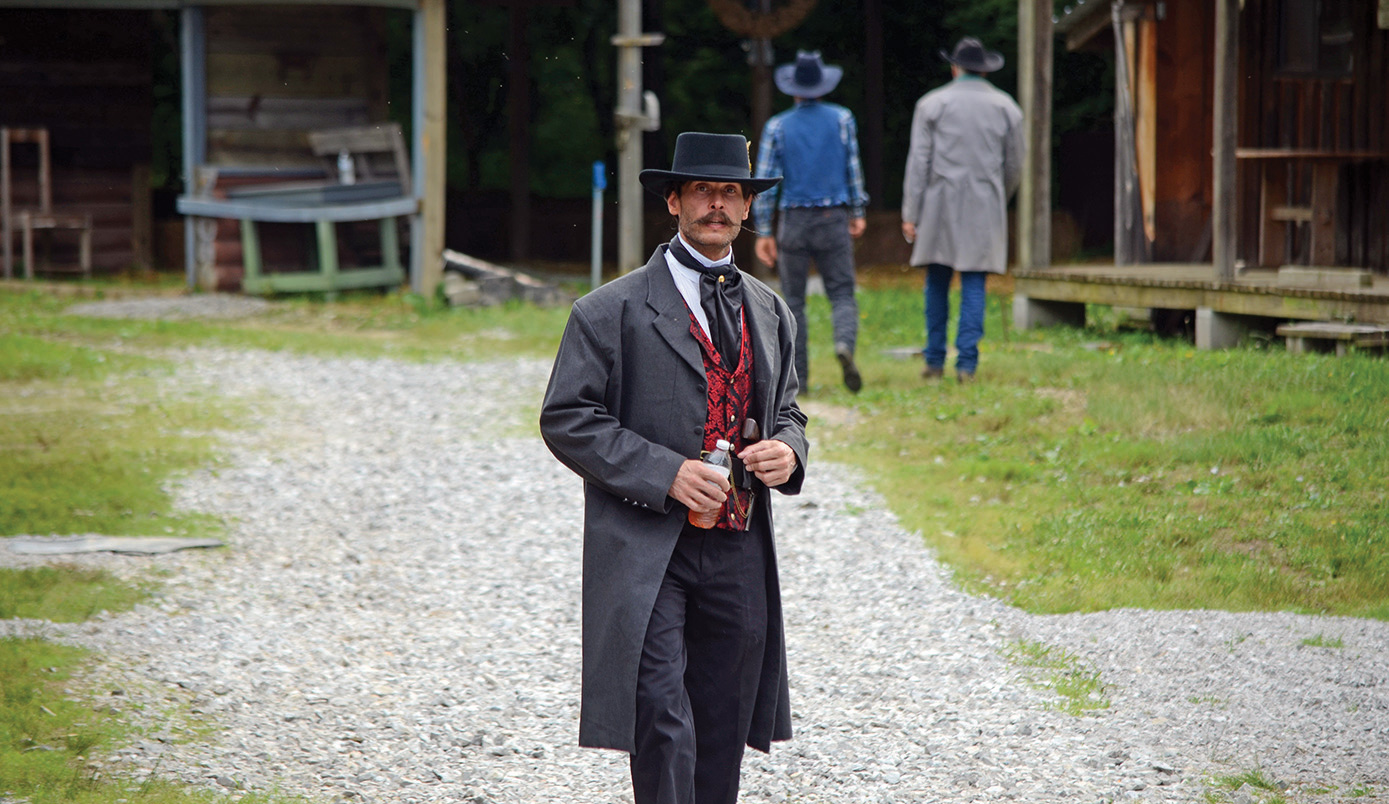 WINFIELD — When Jackson, Ky.-based Showhouse Productions reached out to Steve Salter about using Possum Trot as the set for a music video, Salter knew he had a golden opportunity on his hands.

Salter — who, with his partner, Kim Harmon, owns the replica vintage western town off Pleastant Grove Road — didn’t know the particulars at the time. But after Showhouse Productions spent the weekend filming at Possum Trot, Salter and Harmon were even more excited.

The company is producing a video for Halfway To Hazard’s forthcoming single, “American Outlaw.” The up-and-coming band spent the weekend at Possum Trot with a team of production workers and actors filming most of the scenes for the video. The remaining scenes will involve the Big South Fork Scenic Railway in nearby Stearns, Ky.

“The song is just incredible,” Salter said after hearing it. “I could see it being a No. 1 hit. I got goosebumps when I heard it, it was so good.”

The song and video center on “Bad Tom” Smith, an outlaw who terrorized eastern Kentucky in the late 19th Century. Smith was convicted of 11 murders and was hanged in Jackson, Ky., in 1895.

Showhouse Productions recently filmed a documentary on Smith, and they’re currently raising capital for a feature film about the outlaw. They hope to use the Halfway To Hazard video as a launching pad for that fundraising.

If and when the feature film becomes a reality, Showhouse Productions is already committed to filming part of it at Possum Trot.

“They mentioned the possibility of staying here for an entire month,” Salter said.

Salter and Harmon, who own Big South Fork Outdoor Adventures and Fightanium gym, purchased Possum Trot last year. They spent the winter making improvements to the facility and are now making it available for special events.

Possum Trot has already played host to several weddings this year — with several more scheduled — along with other events. It will continue to be used as a firing range for law enforcement, and its owners see the sky as the limit on what the facility can be used for going forward.

“We have a long way to go, but we’re getting there,” Harmon said. “We don’t want to overwhelm ourselves.”

The vintage western town consists of several cabins and other buildings, right down to an authentic-looking saloon. Salter and Harmon have already spoken with local musicians about concerts and they’re developing other bold plans.

“We envision a little bit of everything,” Harmon said.

Showhouse was sold on Possum Trot for its “American Outlaw” video in part because of the ability to lodge on site.

“They looked at half a dozen places and this one was the best,” Harmon said, adding that they were attracted by the ability to stay in the cabins.

“Most places they would have to stay in a motel and drive all their production equipment to the set, but not here,” Harmon said.

Several local residents played roles as extras in the video, which will now move into the post-production stage and may eventually be seen on CMT or GAC television. Salter and Daniel Terry served as stunt doubles — one scene features Salter diving off the roof of an exploding building — while Mike, Christy, Allie and Kaley Tillett, Aron Thompson, Jim Slay, Wayne Jeffers and Alyssia Strunk also took part in the filming.

This article is reprinted with permission from the Independent Herald newspaper.

A quick hike to burn off the Christmas excess