ONEIDA, Tenn. — While the Big South Fork National River & Recreation Area and the North Cumberland Wildlife Management Area are home to just two types of venomous snakes — the copperhead and the timber rattler — visitors and their pets should beware of these creepy-crawlies when exploring the forests of the northern Cumberland Plateau during the warm-weather months.

That point was unfortunately hammered home Saturday, when Tate — a golden retriever who loved the hiking trails of the Big South Fork NRRA — was bitten by a copperhead and later died.

Nancy Chambers said she and her husband, Matt, were camping along the John Muir Trail segment that connects Leatherwood Ford to Grand Gap Loop Trail when Tate was bitten by the snake. They cut their trip short and rushed him to a veterinarian, but he died a day later. 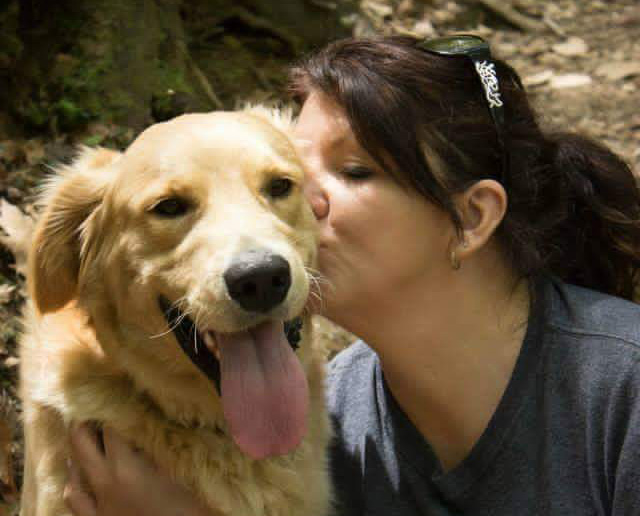 Nancy Chambers is pictured with her golden retriever, Tate, during a hike in the Big South Fork National River & Recreation Area.

The Chambers and their dog were hiking to the 6.8-mile Grand Gap Loop Trail, which was part of the Twenty Week Hiking Challenge. The John Muir Trail along the Big South Fork River — as well as the popular Angel Falls Trail on the opposite side of the river — are notorious for copperhead sightings, particularly during the late evening hours.

On the hike in the evening before, Chambers said she and her husband saw six copperheads along the trail. After camping at Fall Branch, just before the trail climbs the mountain to Grand Gap, Tate was bitten the following morning.

Copperheads are the least lethal of all venomous pit vipers, and fatalities — even among pets, such as dogs — are relatively uncommon. Still, the snake can prove dangerous to animals, experts say.

“Most of the time the bite isn’t deadly, but can cause extreme swelling around the bitten area, along with nausea and pain,” Dr. Sharpe said.

Unfortunately, dogs that have been bitten in the past are much more likely to have an extreme, sometimes deadly, reaction to the snake’s venom, Dr. Sharpe said. That was the case with Tate, who had been bitten earlier in the spring.

Dr. Sharpe said it is important to take precautions with dogs while in the outdoors.

“Dogs are nosey creatures by nature,” she said. “They are always intrigued by new sites and smells.”

The best way to avoid injury to the animal, she said, is to restrict the dog’s mobility — such as by keeping it on a leash and close to side.

“Retractable leashes and shock collars give the dog too much freedom to get into trouble,” Dr. Sharpe said.

She added that it is best to stick to the trail — avoiding underbrush that could put both the dog and its owner at risk of being bitten.

Additionally, Dr. Sharpe said, it is not a bad idea to keep a dose of Benadryl on hand — one milligram per pound of the pet’s body weight — to give to dogs immediately after a snake bite, which will slow down the reaction and allow more time to reach a veterinary clinic.

Unfortunately for pet owners, anti-venom is pricey — at $500 a vial — and carried only by emergency and referral centers, which are located more than an hour away from the northern Cumberland Plateau. Still, Dr. Sharpe said, it’s important to seek immediate medical attention.

“Local vets might not carry anti-venom, but can offer you treatments to help your pet cope with the pain and inflammation caused by venom,” she said.

Of all the venomous snakes in North America — including the two varieties found along the northern Cumberland Plateau — the copperhead is considered the most likely to bite. Part of that is due to the snake’s tendency to freeze instead of slithering away when a perceived danger approaches. That, coupled with the snake’s impressive camouflaging ability, sometimes leads to humans stepping on or near the snake without being aware of its presence.

Still, experts say, copperheads are not overly aggressive and prefer to slither away. Often, they will bite only when physical contact is made.

The venom of a copperhead is relatively mild, and bites sustained by humans are generally not of significant concern, provided medical attention is sought immediately. However, the bites are extremely painful and can cause severe illness. In Tennessee, only one death has been recorded from a copperhead bite — in January 2011, a 26-year-old man died in Chattanooga after being bitten while handling a copperhead. When death does occur due to a copperhead bite, it is usually the result of an underlying medical condition.

Several species of non-venom snakes native to the northern Cumberland Plateau are often confused with copperheads because they are very similar in appearance. Among them are milk snakes, hognose snakes, pine snakes and — perhaps most commonly — water snakes. Copperheads and water snakes are almost identical in color and have very similar markings. However, copperheads are distinguishable by the heat pit on their head, similar to other pit vipers, and their elliptical pupils. Non-venomous snakes have round pupils and no heat-seeking pits.

The bite of a timber rattlesnake is considered a bigger concern than that of a copperhead, as timber rattlers typically inject higher concentrations of venom. However, bites from timber rattlers rarely occur because they are docile snakes. They typically announce their presence by rattling long before they bite. When they do “strike,” timber rattlers often feint — an effort to scare away perceived danger.

Along the northern Cumberland Plateau, timber rattlers are much less seldom seen than copperheads.