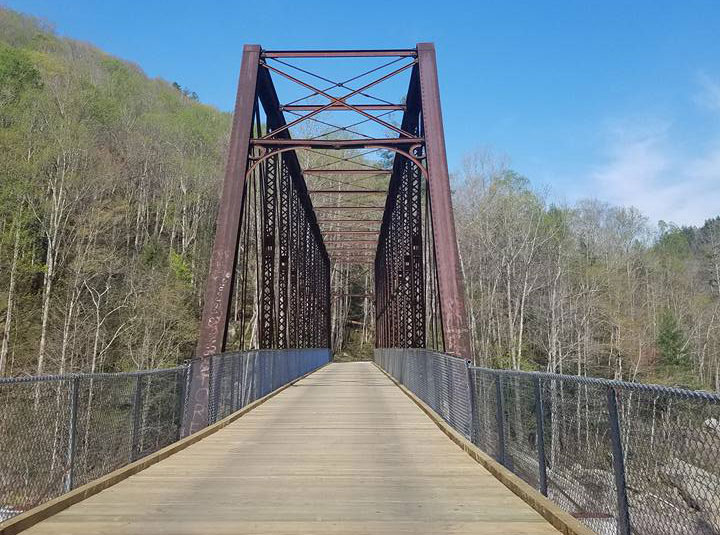 ONEIDA, Tenn. — The newly renovated O&W Bridge across the Big South Fork of the Cumberland River has reopened.

The historic bridge, located in the Big South Fork National River & Recreation Area, spans the river from which the 125,000-acre national park draws its name. It is more than a century old, and was once a railroad bridge.

O&W stands for Oneida & Western, the railroad that once linked the small Cumberland Plateau towns of Oneida and Jamestown. The railroad was constructed between 1914 and 1920 as a way for coal and timber companies to reach the expansive reserves of natural resources in what is now the Big South Fork NRRA. Construction of the railroad began in Oneida and ended in Jamestown.

For decades, steam locomotives traveled the O&W, hauling passengers and supplies into the gorge area, and hauling coal and timber out. Eventually, mining and logging operations ceased, and the railroad was abandoned. The rail bed was transformed into a road for passenger vehicles.

No one is sure exactly when the steel whipple bridge over the Big South Fork was built. But it was more than a century ago, and it is one of the last remaining bridges of its kind that remain operable in the United States. The bridge was originally built in the late 19th century, and was later dismantled and moved to the O&W in 1917.

A need to restore the bridge was realized when the Scott County Road Department replaced some deteriorating flooring in 2015 and discovered that the wooden cross ties that served as the sub-flooring were rotten.

The Scott County Chamber of Commerce Tourism Committee, which had previously launched discussions about securing the materials and volunteer labor to complete a restoration project, began a conversation that eventually led to the Industrial Development Board of Scott County agreeing to facilitate a state tourism grant to cover the costs of the project. The Chamber of Commerce applied for and received the grant, in the amount of $50,000. The Road Department agreed to provide the labor, for a total project cost of $94,000. An anonymous donor provided the matching funds for the grant.

While the O&W Bridge was closed for nearly a month, every piece of wood on the bridge, as well as the fencing that provides security, was replaced.

The bridge reopened on April 10.

“All materials that possibly could be purchased locally were bought from local businesses,” said Stacey Kidd, executive director of the Scott County Chamber of Commerce. “The cross ties, decking and fencing have all been replaced.”

The project did not utilize any local tax dollars, Kidd added.

The O&W Bridge is used by horseback riders to access trails from the Cumberland Valley Trailhead, among other points. Hikers use the bridge as part of the John Muir Trail and the Sheltowee Trace National Recreation Trail, which span the Big South Fork NRRA from north to south. The bridge area is also a popular terminus for whitewater paddlers who begin their kayak and raft trips from the river confluence on John Long Road or from Burnt Mill Bridge further upstream. Motorists use the bridge to access popular fishing areas and swimming holes on the west side of the BSF River and along North White Oak Creek.

Great winter hikes in the BSF

Bluegrass & Bikes Fest in the books!