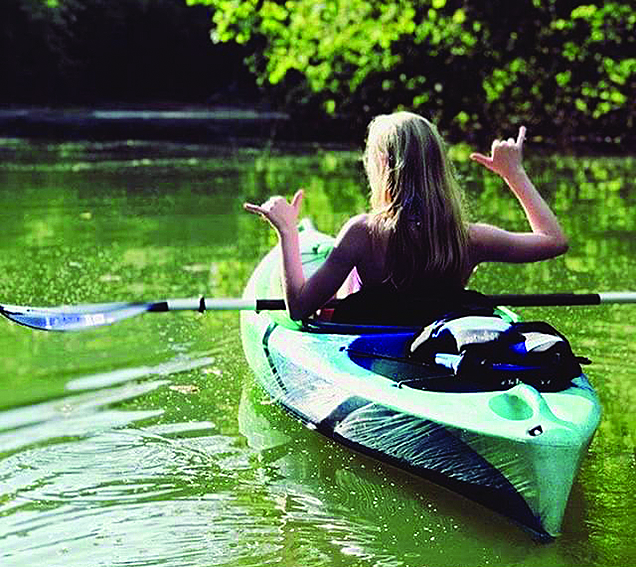 Recreational kayaking: it’s one of America’s fastest-growing forms of recreation, exploding in popularity over the past five years.

Perhaps spurred by the addition of budget-priced kayaks at discount stores like Walmart, kayaking has taken on a new life in just the past three years, with boat manufacturers experiencing record sales growth.

Nowhere is that more true than in the the Upper Cumberlands. Whereas it was once uncommon to see a kayak on the Big South Fork River after the whitewater season ended in spring, the brightly-colored personal watercraft are now as common on the river as the gar that inhabit the waters around Station Camp.

The health benefits of kayaking are well-noted. It’s a physical workout; just one hour of paddling can burn up to 350 calories, depending on how hard you paddle. And Men’s Journal calls kayaking one of the best workouts for heart health. Proper paddling technique provides a workout for the muscles in the legs, back and shoulders, as well as the abs. It’s also a mental workout. In his book, “Blue Mind,” Wallace J. Nichols, PhD wrote that the release of mood-enhancing endorphins experienced by exercising athletes is enhanced when water is added to the picture. In other words, there’s just something relaxing about being on the water.

“It puts you in that relaxed state,” Nichols said. “You don’t need to study or practice meditation. You just need to pay attention to the water around you.”

Literally anyone can try kayaking — even if they can’t afford a boat of their own. Through an unique grant partnership, the Scott County Chamber of Commerce and Big South Fork National River & Recreation Area utilized public funding to purchase four kayaks and associated gear last year. Those kayaks are available to borrow — free of charge, except for a small application fee — from South Fork Tack in Oneida. Virginia Bruce, owner of the tack shop, recommends calling ahead to reserve a kayak so that it will be available on the day it is needed (569-6700).

So where can you float your boat? As it turns out, the possibilities are many.

The calm, smooth-flowing waters of New River were perhaps the first frontier for recreational kayaking in Scott County. Far upstream of the rough-and-tumble whitewater that defines the river system as it enters the Big South Fork gorge, New River features the kind of flat water that is perfect for recreational paddling.

There are two popular access points for paddlers. One is the Winona Bridge, located on Winona Road east of Huntsville. The other is the Tennessee Wildlife Resources Agency boat ramp on Town Springs Road in Huntsville, behind the old county jail.

The trip from Winona to the old Town Springs in Huntsville is about 7.25 miles. It’s another six miles or so to the U.S. Hwy. 27 bridge south of Huntsville, for a total trip of around 13.5 miles for those who choose to put in at Winona and take out at the highway bridge.

Of course, it’s possible to paddle further upstream along New River, but access points aren’t as easy to come by.

There are several access points along the Big South Fork River, which can be utilized to put together trips of varying distances. The upper-most access point is the O&W Railroad Bridge on O&W Road. Anything above that is whitewater that should not be tackled by novice paddlers in recreational kayaks. The drawback to the O&W is the long drive to retrieve the vehicle at the end of the day, once the paddling trip is finished. For that reason, Leatherwood Ford is a much more popular access point for recreational kayakers.

The drawback to Leatherwood Ford is that the next access point is Station Camp — on the far side of the dangerous Angel Falls rapid. It’s easy enough to portage around Angel Falls — just look for the portage path on river right after passing the mouth of Fall Branch and seeing the Angel Falls Overlook towering over the river. But some people consider it a bear of a job to lug their boat and gear along the portage path to the bottom of the rapid, especially in the summer heat.

Those who are willing to put forth that extra work are treated to what are probably the best sites of any recreational river run on the Big South Fork, with the cliff lines towering over the river and huge boulders located along and sometimes in the river.

Some kayakers prefer to enter the water at Station Camp and float downstream into Kentucky. However, the next access point below Station Camp is Blue Heron near Stearns, Ky. At about 19 miles, that stretch of river can be a chore to complete in a single day, and also includes a dangerous rapid that must be portaged: Devils Jump. The portage trail is located on river left just above the entrance to the rapid.

Downstream from Devils Jump, the Big South Fork becomes calmer still as its free-flowing waters begin to be harnessed by Lake Cumberland and the Wolf Creek Dam. There are several more access points, with the most popular being Yamacraw Bridge on Ky. Hwy. 92 west of Stearns.

The 300-acre Flat Creek Reservoir in Huntsville is growing in popularity among recreational kayakers who don’t want to be confined to the nearest takeout point and instead prefer to paddle until they’re tired, then head for shore.

Although it’s far less popular — primarily because it’s much smaller — Oneida City Park Lake is sometimes utilized by recreational kayakers as well. And the Howard H. Baker Sr. Watershed Lake in West Oneida is sometimes a destination for paddlers, though it requires carrying the boat from Rosser Drive off Williams Creek Road and lugging it over the earthen dam to the water’s edge — which proves daunting enough to deter most paddlers.

One thing that should be noted about kayaking the Big South Fork River system is the occasional rapids that will be encountered. During the summer months, the streamflow on the BSF is often low enough to make some of those rapids nearly impassible, even along the calmer stretches of the river between Leatherwood and Blue Heron. If the water is flowing at a decent rate, the rapids between Leatherwood and Station Camp are mostly wave trains that are just feisty enough to make things interesting — and perhaps leave paddlers a little wet — but not so much so that capsizing becomes a real hazard.

However, the rocks along BSF and even in places along New River can cause damage to kayaks. While no kayak looks new for long — scratches and dents are just part of the game — the kayaks offered for use by the Chamber of Commerce through South Fork Tack carry a stern disclaimer that they’re not for use in whitewater. Persons borrowing the kayaks sign a waiver agreeing to pay for any damages that incur.