Hike — or ride — into history at BSF

ONEIDA, Tenn. — There are plenty of sights to see in the Big South Fork National River & Recreation Area. From towering sandstone cliffs to cave-like rock shelters to spectacular waterfalls, the hundreds of miles of trails within the 125,000-acre national park offer something to see at every bend. Sometimes, though, the most interesting sights to see along the trails are the ones with a story behind them.

At one point, from the middle of the 19th Century until the middle of the 20th Century, these were thriving farming communities. At their peak, hundreds of people lived in these valleys. There were churches, schools, even a general store and a mail route.

Today, very few signs of civilization remain, but plenty of history remains for those who know where to look and what to look for. On either horseback or foot, these valleys are fun to explore.

Equestrian riders can ford the river most times of the year. However, hikers must wait until the water is sufficiently warm and sufficiently shallow, which limits them to the summer months. At a streamflow of around 250 cubic feet per second (check the gauge), the water level at the Station Camp crossing will be around knee-deep on the average male. As the streamflow rises, hikers should not attempt to cross on foot. The water can become swift and dangerous.

Once you’ve crossed the river, tie into River Trail West. Hikers will prefer to stick to the John Muir Trail, which parallels the horse trail most of the way downstream to Big Island. The first stop along the route is Parch Corn Creek. The trail will cross the creek near its mouth at the Big South Fork River. A short side trip up Parch Corn Creek will take you to the old Blevins farm. 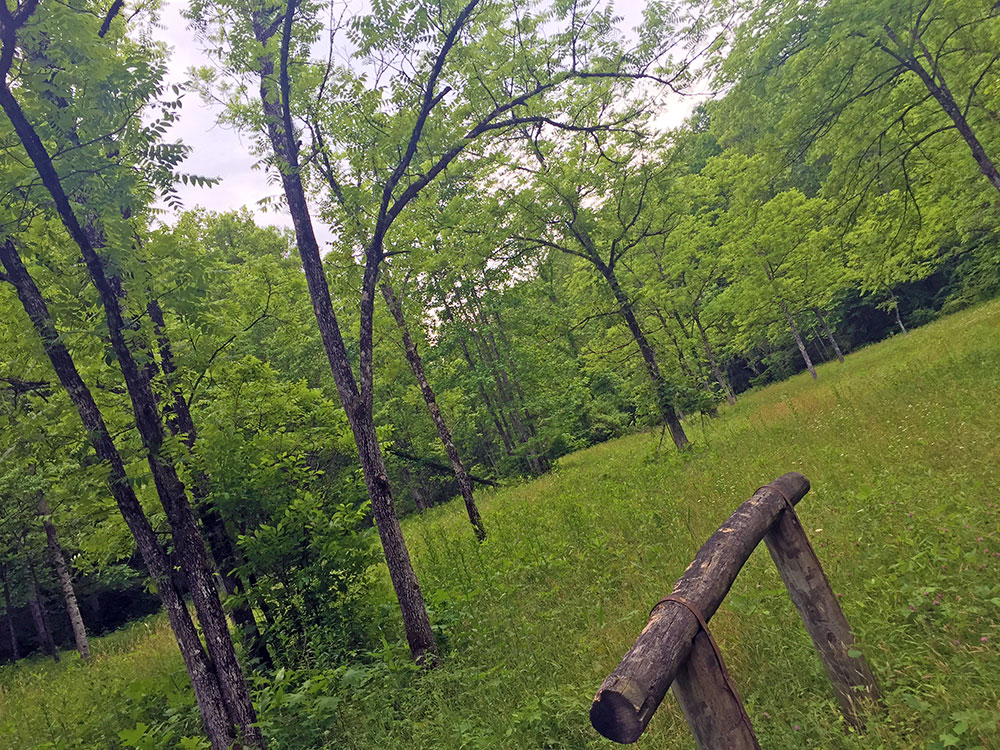 Today, only a couple of cleared fields and a partially-collapsed chimney — along with a few gravestones that are hidden in the undergrowth — mark the place where Armstead and Helen Terry Blevins once made their home. The Blevins family was constructed in 1881. It was built by John Litton — the same John Litton for which the Litton/Slaven Farm near Bandy Creek was named — for a fee of $5. Litton was a master cabin builder known far-and-wide in these parts.

The Armstead Blevins cabin was occupied until the 1940s and was one of the last remaining structures in the Big South Fork NRRA when it burned in 1998.

Hikers will find an old outhouse nearby, along with a natural spring that was used by the Blevins family to keep their eggs and butter cold. Mrs. Blevins is buried near where the cabin once stood.

Armstead Blevins’ father was Jonathan Blevins — the first white settler in the general area where this old farm once stood. It was Jonathan Blevins who built the original settlement where Charit Creek Lodge now stands at the confluence of Station Camp and Charit creeks. The lodge, accessible via a 3-mile trail from the Station Camp Crossing west along Station Camp Creek, was once a long hunter’s camp, then a subsistence farm, then a hunting lodge, and is today a backcountry hostel.

Jonathan Blevins’ first wife was Katy Troxell, the daughter of “Big Jake” Troxell, a renowned Cherokee Indian in the area that is today the Big South Fork NRRA. Katy Troxell was known by the Cherokee as Princess Cornblossom. Legend — disputed by many — says that Princess Cornblossom’s Cherokee people, most of them women and children, were massacred by white settlers as they hid out under Yahoo Falls in McCreary County, Ky., which is also now part of the Big South Fork NRRA.

Once you depart Parch Corn Creek and the Blevins farm and head on downstream towards Big Island and No Business, you’ll pass the site of the Duck Shoals Raid, a skirmish that played out during the Civil War.

When the country found itself divided in 1860, the northern Cumberland Plateau area that now makes up the Big South Fork NRRA was strongly pro-Union. Scott County voted overwhelmingly against secession in 1861. The rest of East Tennessee joined them in rejecting secession, but West Tennessee’s strong Confederacy faction helped sway the majority of the vote, and Tennessee seceded from the Union. Scott County responded by voting to secede from Tennessee, and formed the Independent State of Scott.

Most of the settlers in the Big South Fork area were not interested in fighting. They did not see the war as their war, and they had enough things to do at home to keep them busy. As the war raged, the fighting did not often come to the northern Cumberland Plateau, but the remote location of this area, the general lawlessness that resulted from the county seat being so far away and so difficult to reach, and the pro-Union sympathies of the settlers here made it ripe for raids by Confederate guerrilla groups.

In response, the settlers formed what they referred to as the Home Guard, led by “Tinker” Dave Beaty. The Home Guard’s job was to defend the area from pro-Confederate guerrillas. Lookouts were stationed downstream at Big Island to provide notification when guerrillas were moving in so that the subsistence farmers up and down the river could hide their livestock.

In 1863, a group of guerrillas conducted a raid along No Business Creek. After plundering the community, they took up shelter for the night in the home of Jonathan Burke. That night, members of the Home Guard surrounded the Burke home and opened fire on the men inside. Of the 13 men who were holed up in the cabin, seven were killed.

Today, a wooden marker along River Trail West marks the spot where the Burke home once stood. It is believed that the seven Confederate guerrillas were buried nearby, but no one knows the location of their graves.

On downstream, horseback riders will come to Big Island, a large deposit of silt in the middle of the river, and a crossing for horseback riders to cross the stream as they travel into the backcountry from Station Camp Horse Camp atop the plateau. Hikers, meanwhile, will have left the river behind; the John Muir Trail leaves the river a mile upstream of Big Island and climbs several hundred feet into the mountains before dropping back down to No Business Creek and rejoining the horse trail.

Hikers who make the climb up the John Muir Trail will find themselves near the base of Maude’s Crack when they crest the hill. This narrow rock fissure creates a passageway from the bottom of the cliff line to the top. It is named for Minnie “Maude” Roysden, who used the passageway as a short cut to deliver lunch to her husband and his co-workers as they worked in the timber woods here in the early 20th Century. 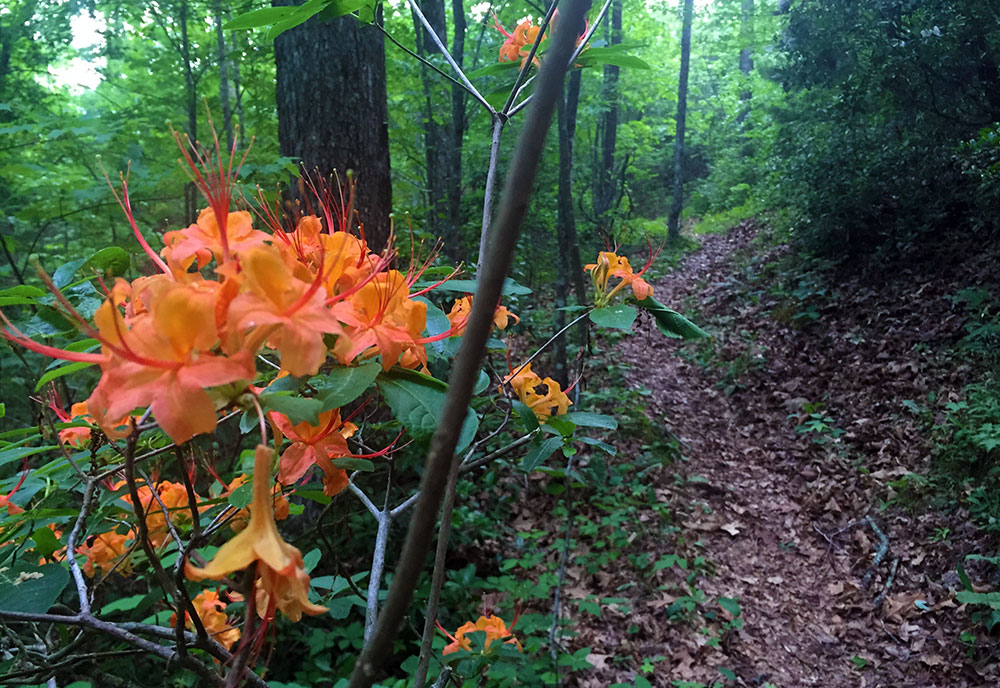 No Business Creek was the most thriving community within the Big South Fork NRRA at one point. Today, the fields are being swiftly reclaimed by nature and most of the evidence of homesteads is disappearing due to reforestation. But at the creek’s headwaters stands the Ranse Boyatt place, where another interesting piece of history played out.

In 1933, as the Great Depression continued to grip the Big South Fork region, a 22-year-old man named Jerome Boyatt joined four other young men from the No Business community on a train to Rock Creek Camp, a logging camp operated by the Stearns Coal & Timber Company across the ridge from No Business Creek.

There, Boyatt got into an argument with his uncle, and the argument turned physical. The camp’s foremen ordered the men arrested and had them held in a train boxcar as the sheriff was summoned. When the sheriff — George Winningham — arrived hours later, shots were fired. The sheriff’s deputy and son, Floyd Winningham, was killed instantly. The sheriff was mortally wounded and died the following day in a Nashville hospital. Jerome Boyatt fled into the wilderness.

No one knows for sure who was responsible for the lawmen’s death. Some said that Jerome Boyatt opened fire, unprovoked, to avoid arrest. Others said that the lawmen fired first and that Boyatt was only defending himself.

No matter where the fault lay, George Winningham was well respected, and a posse was quickly formed to bring Jerome Boyatt to justice. Boyatt spent the next several weeks hiding out in the rugged terrain of No Business. When the posse failed to find him, they arrested his father and mother, along with his younger siblings who still lived at home. The family was taken to a jail in Byrdstown in an effort to force Boyatt from hiding.

Several days later, Boyatt’s father — Ransom “Ranse” Boyatt — was allowed to return home to tend to the family’s livestock while the family stayed in jail. A few days after that, his decomposing body was discovered locked inside the family’s cabin. After an inquest, the coroner ruled it a homicide. He had been hanged.

The ruthless effort to drive Jerome Boyatt from hiding worked. Fearing harm to more of his family, Boyatt turned himself in. He was arrested and taken to the Scott County Jail in Huntsville.

Two weeks later, a group of more than two dozen masked men overpowered the jail and took Boyatt and another man — Harvey Winchester, accused of killing a lawman’s son — away in cars. Their dead bodies were discovered the next day — tortured and riddled with bullets — along U.S. Hwy. 27 in Helenwood a few miles away. No one was ever charged with their murders. 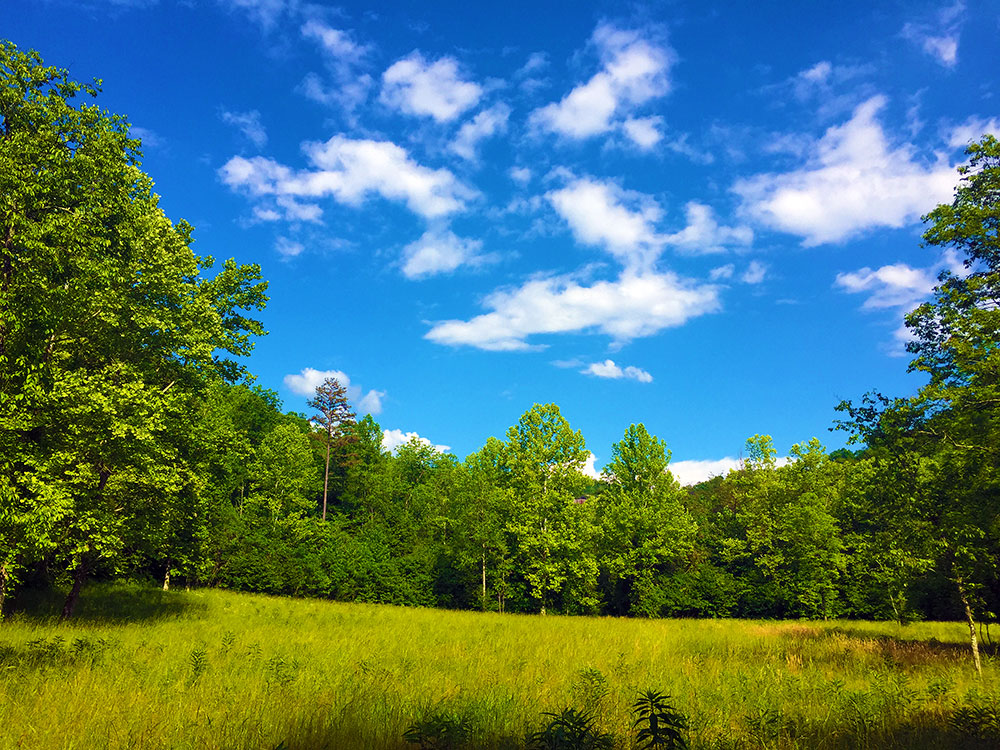 Today, only a large double-chimney at the far end of a two-acre field remains to remind us of the tragedy that once played out along the No Business Creek headwaters. Ranse Boyatt was buried in a cemetery near the old  home place. There are six graves there; his was the last.

After exploring the Ranse Boyatt place, it’s time to turn and head back. Hikers and riders who came in via Station Camp Creek will have completed about 16 miles by the time they arrive back at their vehicles.

As an alternative to fording the river, hikers and riders can start at the Terry Cemetery Trailhead and take Longfield Branch Trail to No Business Creek. Once arriving at and exploring the Blevins farm at Parch Corn Creek, they can head back to Terry Cemetery.

Hikers can save their exploration of Maude’s Crack for on the way out. At the top of the crack, a one-mile hike leads back to Terry Cemetery. 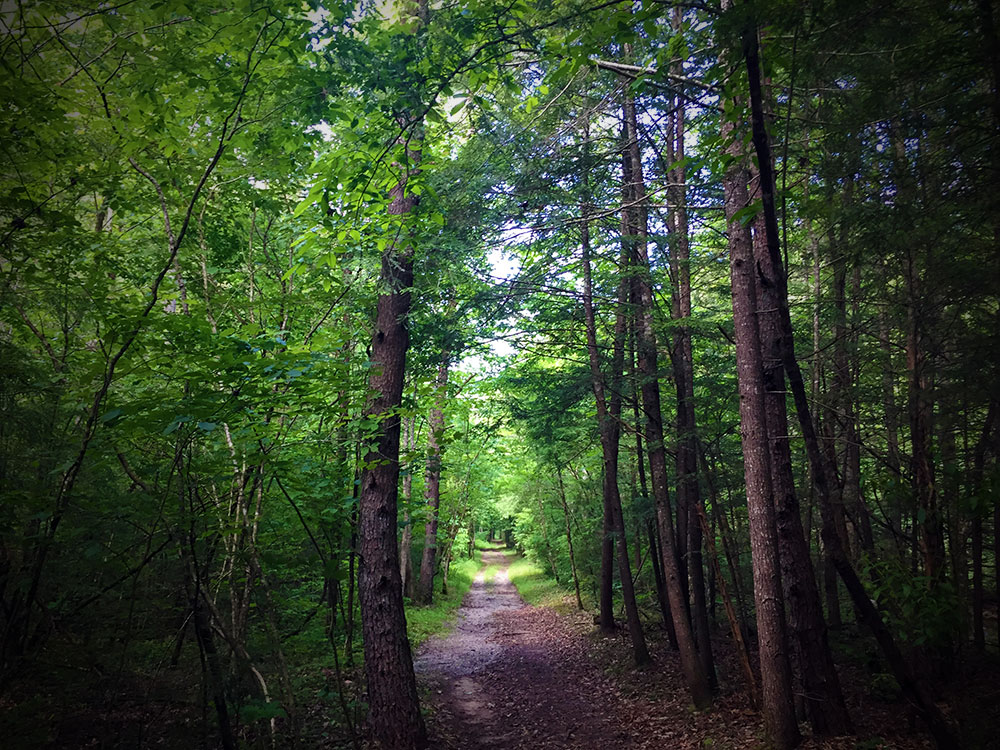 Closing in on Winterfest