In the 125,000-acre Big South Fork National River & Recreation Area, there are more spectacular geological formations than you can shake a stick at. But few of them come close to touching the magnificence of the Twin Arches.

When most folks talk about the geological makeup of the northern Cumberland Plateau more closely resembling the West than anything in the eastern U.S., they’re usually referring to the towering duo of arches in western Scott County. Standing at 103 ft. and 62 ft., respectively, with a combined span of 228 ft., the Twin Arches make up one of the largest natural land bridges in all the world. 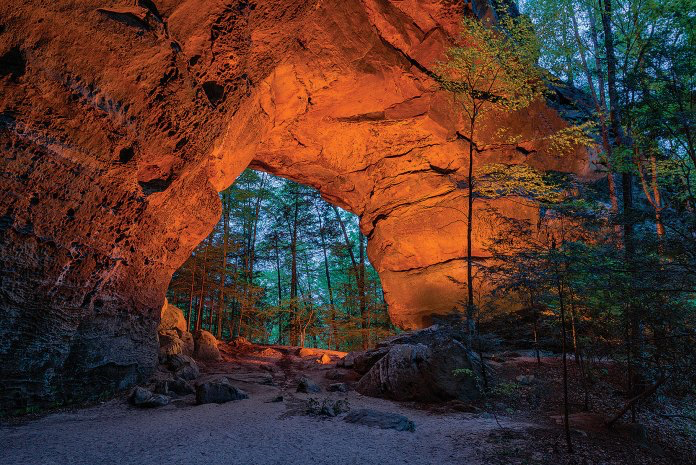 But these spectacular rock formations aren’t the only sight worth seeing along the 6.0-mile Twin Arches Loop Trail. It is a hike that is steeped in history, photogenic sites and other points of interest, which is why we chose it to conclude the Twenty Week Hiking Challenge.

Most hikers who venture out Divide Road to the Twin Arches Trailhead hike only the shorter, inner loop, a 1.4-mile exploration of only the Twin Arches. By doing so, they miss out on much of the trail, which dips into the valley and treks by several historic homesites before climbing back to the top of the ridge again. Among those historic homesteads are Charit Creek Lodge, the Tackett homesite, and Jake’s Place. Each has its own story to tell.

From the parking lot at the Twin Arches Trailhead off Divide Road, there’s only one way to start the hike. But the well-worn trail soon forks. To the left is a steep set of steps; to the right is a footpath that continues down the ridge. It, too, will eventually drop in elevation by way of a set of steps.

For the purpose of the hiking challenge, though, we are going to explore the entire six miles of the Twin Arches Trail. From the base of the steps between the arches, the trail leads further around the ridge. Just as you’re coming into sight of the South Arch, the trail splits and heads deeper into the gorge. Before you take the split, you’ll want to take a moment to explore the South Arch, including Fat Man’s Squeeze — the narrow passageway through the rock on the south side of the arch.

Back on the main trail, hikers quickly descend to a stream below. This is Charit Creek — originally named Charity Creek, for a girl named Charity who died in the stream many years ago.

A short distance further, the wooded creek bottom opens into farmland, and the trail emerges at Charit Creek Lodge. Once the home of Jonathan Blevins, a long hunter and one of the earliest settlers of what is now the Big South Fork, this farm was a subsistence farm for many years. It was eventually sold to Joe Simpson, who operated it as a hunting preserve from 1963 to 1982, when the federal government purchased the land for the national park.

Today, the farm is operated as Charit Creek Hostel, a remote backcountry lodge catering to hikers, horseback riders and hunters.

After taking some time to explore the lodge and chat with its caretaker, you’ll head west along Station Camp Creek, and soon arrive at the Tackett homeplace. Today, the old someplace is little more than a partial rock chimney, but just off the trail nearby are the twin headstones marking the graves of the Tackett brothers — and those simple stones tell one of the most unique stories of all the Big South Fork backcountry.

As the story goes, Confederate sympathizers were searching the area of Station Camp Creek and the surrounding villages for new recruits during the Civil War. While Scott County was heavily pro-Union, most settlers in what is now the Big South Fork simply wanted to be left alone. But the lawless nature of the frontier made it a magnet for troublemakers, putting its residents in danger of everything from guerrilla fighters raiding crops and animals to these Rebel “recruiters.”

In an effort to save the teenage brothers from being forced into service, an elderly relative had them hide beneath a feather mattress. Then she lay atop the mattress, feigning illness. When the soldiers had left her home, she got up to allow the boys out of the mattress, only to discover that they had died of suffocation.

A short distance further up the trail is “Jake’s Place,” the home of Jacob Blevins Jr. and his wife, Viannah. Jacob — or Jakey, as he was known — was the grandson of Jonathan Blevins and is buried at the Katie Blevins Cemetery near Bandy Creek. His cabin stood until Simpson dismantled it and reassembled it at Charit Creek. The chimney remained for many years but has recently fallen.

A short distance after leaving Jake’s Place, the Twin Arches Loop begins its climb back to the top of the gorge. Once at the base of the bluff lines, the trail travels by several shallow but still spectacular rock shelters before intersecting with itself beneath the North Arch at the Twin Arches. Those who look closely and know what to look for will discover evidence of niter mining in some of those rock shelters. Niter was a key component of gun powder, particularly during the Civil War. While subsistence farmers sometimes mined their own niter for personal use, commercial niter mining is said to be the first industry of Big South Fork country.

Getting There: Take S.R. 297 west, through the Big South Fork NRRA, to its terminus at S.R. 154 in Fentress County. Take S.R. 154 north (right) to Divide Road, and Divide Road northeast to Twin Arches Road. The trailhead is located at the end of the road.

Be Careful For: Steep steps, unprotected rock ledges. Use caution with pets and small children.

Look For: The far bunkhouse cabin at Charit Creek Lodge was made from the logs that were once the cabin at Jake’s Place. When Simpson purchased the farm in the 1960s, he also purchased Jake’s Place, dismantled the cabin, and moved it to Charit Creek to build lodging quarters for his clients.

Make It Better: Plan a meal at Charit Creek. Breakfast (eggs, sausage or bacon, pancakes or biscuits, and juice and coffee) is served at 8 a.m. at a cost of $10. Dinner (meat entree, side, vegetables, homemade bread, dessert, coffee, tea or lemonade) is served at 6 p.m., at a cost of $20. Reservations are required and can be made by calling 865-696-5611.

Remember To: Use the #20WeekHikingChallenge hashtag in your photos on social media, or email photos to newsroom@ihoneida.com, along with the names of all members of your hiking party, in order to log your miles.

Don’t Forget: Obey the Leave No Trace ethic by “taking only memories, leaving only footprints.” If you pack it in, pack it out!