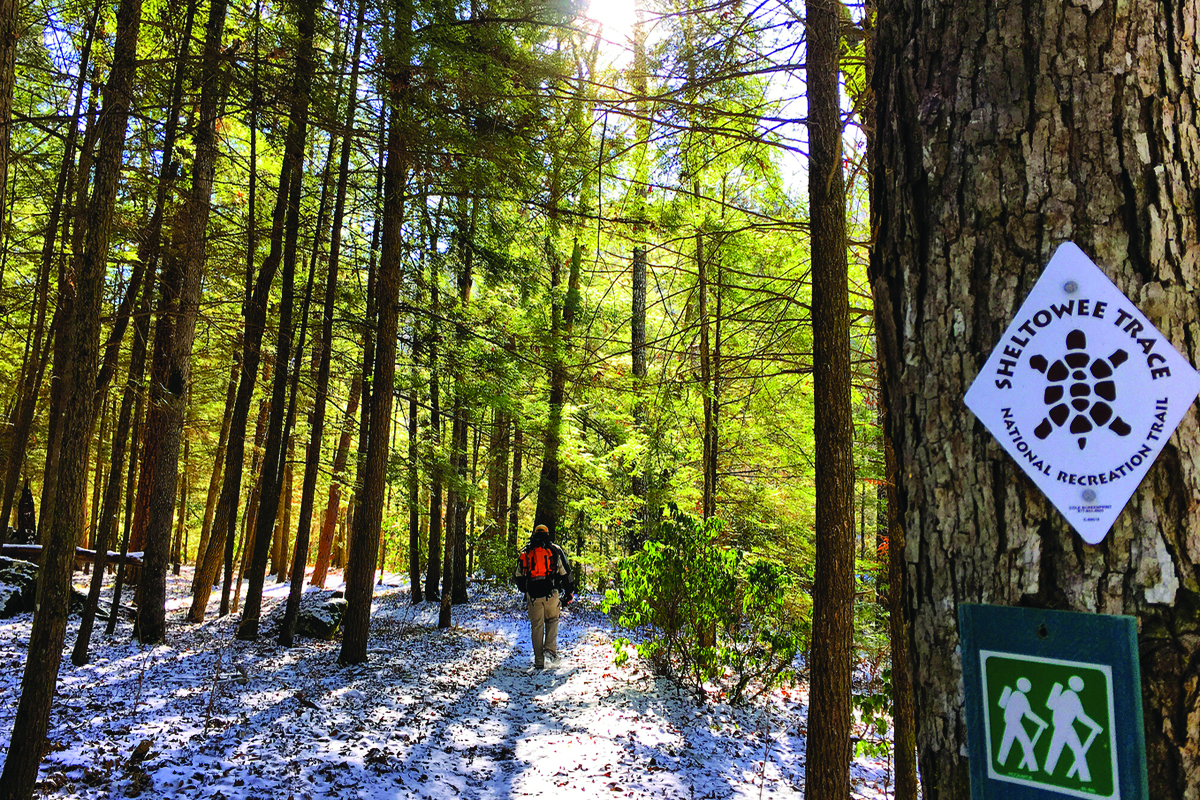 Hardcore hikers know the truth: the cold-weather season is the best time of year for a hike.

There are several reasons why. For one, winter is the waterfall season. There’s a dearth of flowing water during much of the summer and fall, but the Big South Fork National River & Recreation Area’s waterfalls are flowing at full strength for much of the winter, once the seasonal rains set in. For another, the absence of foliage opens up a lot of long-distance views that aren’t otherwise possible in the warmer seasons. Finally, there are no annoying insects — like ticks and mosquitoes — and no snakes to interrupt your hike.

For those who are leery of bears, there’s more good news: winter features minimal black bear activity in the Big South Fork. Bears do not truly hibernate, but they do tend to lay low during the winter months and spend almost all their time sleeping and resting up for the spring season.

And the same is true of people. That just might be the biggest selling point of all for a winter hike: the forests are truly peaceful, because almost everyone else is choosing to stay indoors.

Finally, a layer of freshly-fallen snow adds an entirely new dimension to the beauty and wonder of the Big South Fork region. That doesn’t happen too terribly often, of course; we average less than 10 inches of annual snowfall. But for those who are lucky enough to be outside in the immediate aftermath of a snowstorm, there’s an awesome wonderment to partake in.

Besides, winter is the time of year when we truly need to get out and enjoy nature, for the sake of our wellbeing. Most of us consume way too many calories and carbs between Thanksgiving and Christmas, and a good hike through the forest is a perfect way to work off some of the excess. And it’s proven that being outside — especially when coupled with brisk exercise — causes the brain to release endorphins that improve our mood, which makes a hike the perfect cure to the seasonal stress and depression that so many of us suffer from during the cold-weather months.

So, with all that in mind, here are five perfect trails to get out and hike while you have some time off work this Christmas.

The Grand Gap Loop Trail is a 5.8-mile loop trail that is mostly level and features great views of the Big South Fork River Gorge. Located near Bandy Creek, the trail is rated moderate in difficulty, and features the spectacular Angel Falls Overlook.

There are multiple ways to hike Grand Gap. If you look it up on the hiking website All Trails, you’ll notice that the length of the hike is listed as 11.9 miles. That’s actually if you begin at Leatherwood Ford — the nearest paved trailhead — and access Grand Gap by way of the John Muir Trail. That’s a great hike that begins and ends along the Big South Fork River, with a scenic and brisk climb up the side of the gorge to the top of the plateau in between. But if 12 miles is a bit too much for you, there’s a much easier way to hike Grand Gap.

To access the trail itself, you’ll drive to Bandy Creek, go through the campground, and continue on Duncan Hollow Road (the gravel road that exits the campground on its north side). From there, it’s a 15-minute drive along single-lane, gravel roads to the trailhead. You’ll follow the signs, which will guide you along Duncan Hollow Road to Alfred Smith Road, and then along Alfred Smith Road to its terminus at the trailhead.

Grand Gap is best hiked in a counter-clockwise direction.

The Litton Farm Loop is one of those trails that is great in any season, but if you can catch it after a new-fallen snow, you’ll experience magic. The trail is 6.2 miles in length, beginning and ending at the Bandy Creek Campground, and it is rated moderate in difficulty.

The John Litton/General Slaven Farm is one of only four farmsteads in the 125,000-acre Big South Fork NRRA that have been preserved. It is a turn-of-the-century farm that showcases the simple, yet difficult, way of life for the region’s subsistence farmers.

Hiked in a counter-clockwise direction, the trail begins by following Fall Branch for a couple of miles, and the sights you’ll see include Fall Branch Falls, a small waterfall that is at its best in the winter.

Eventually, the trail crosses the north fork of Fall Branch in a hemlock forest and begins a slight ascent towards the Litton Farm. Once you’ve left the farm, you’ll re-enter the forest and climb to the top of the ridge, re-emerging in some old fields and following the lightly-used gravel roads back to the campground.

If you’re not camping, park at the swimming pool. The trail is just across the road. 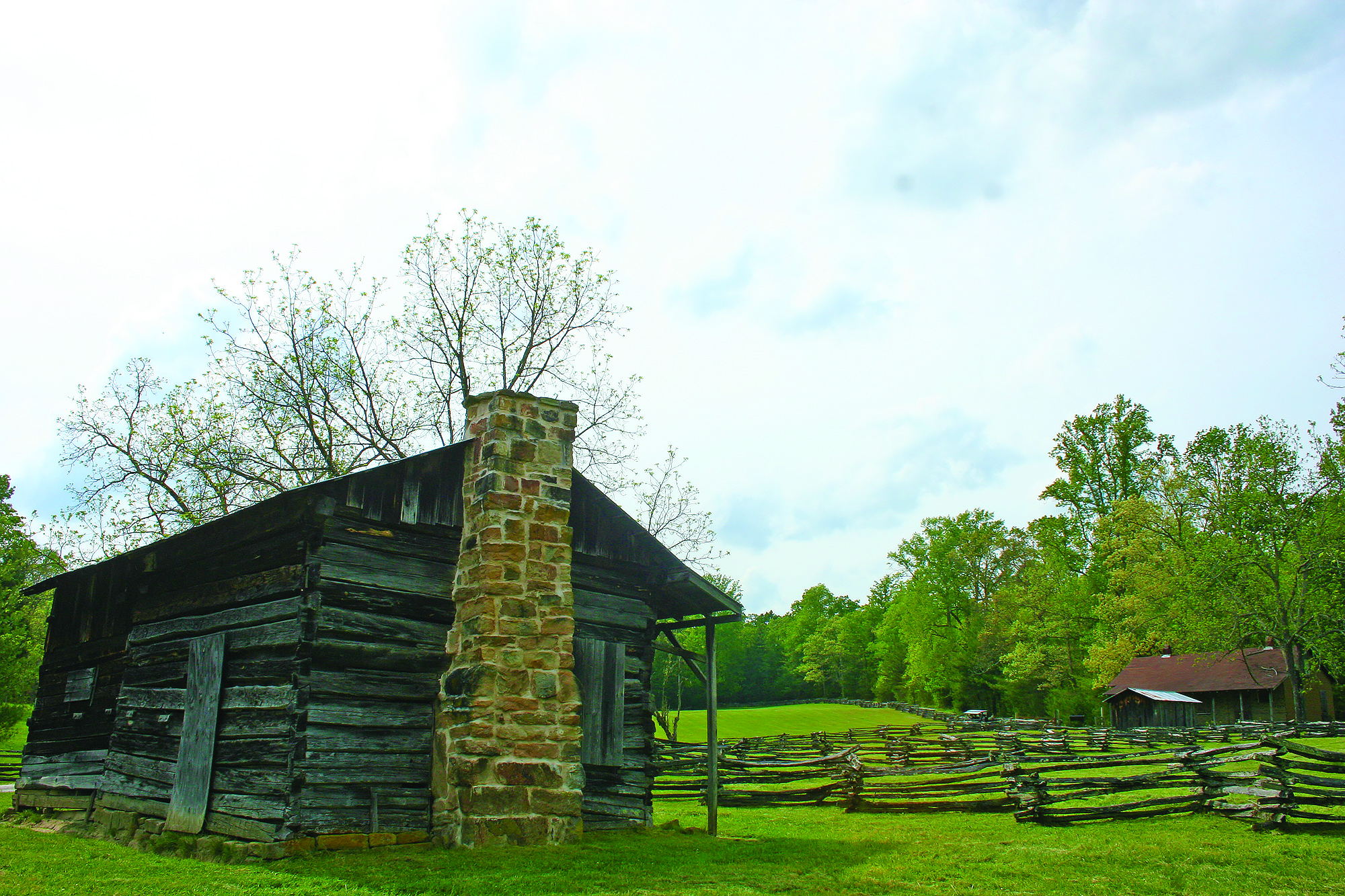 The Oscar Blevins Farm is another of those farmsteads that have been preserved, and it is especially picturesque — especially in the spring blooming season, or at the peak of the fall foliage season, or in the winter after a snow. Many locals use the farm as a natural backdrop for photo sessions and you can actually drive right to it. But the hike is half the fun!

The Blevins Farm Loop is a 5.1-mile loop trail that is rated easy in difficulty, and begins and ends at Bandy Creek. Park at the north end of the Bandy Creek area to access the trailhead. Look for the paved parking area on the left just before Bandy Creek Road turns from pavement to gravel.

The trail quickly descends into a rhododendron and laurel thicket of sorts before eventually crossing Bandy Creek on a footbridge and turning up the stream. You’ll follow the creek for a distance, passing an old farmstead along the way, before emerging at the Oscar Blevins Farm. You will want to take some time to explore the farm, but none of the buildings are accessible. From the farm, you’ll loop back to the campground through a hardwood forest, passing over the Collier Ridge mountain bike trail along the way. 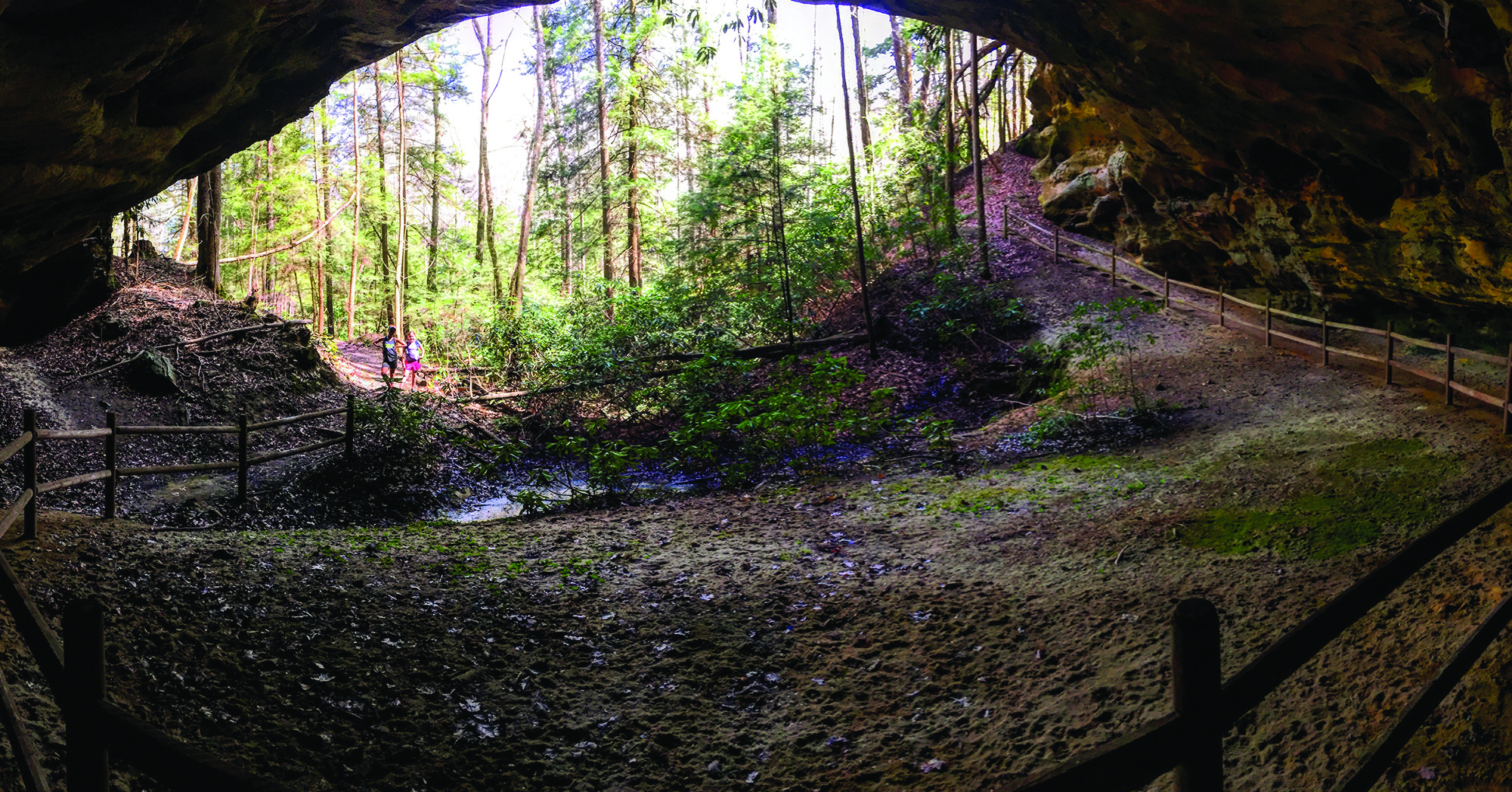 The Middle Creek Nature Loop is located on the west side of the Big South Fork. It is a 3.2-mile loop trail that is rated easy in difficulty, beginning and ending at the trailhead on Divide Road.

This hiking trail is best known for its rock shelters. Step for step, you won’t find any more rock shelters on any hike anywhere in the Big South Fork. If you’re hiking in a clockwise direction, you’ll pass a series of rock shelters in succession, each seemingly more magnificent than the last.

The trail begins in a hardwood forest from Middle Creek Trailhead. You’ll turn left, and the trail will parallel the road for a short distance before turning beneath the bluff line. For most of the hike, you’ll follow the contour of the bluff line, passing by or through a series of rock shelters. During the wet-weather winter months, there will also be a number of seasonal waterfalls along the way. Towards the end of the hike, the trail will climb back to the top of the ridge and from there it is an easy walk back to the trailhead. 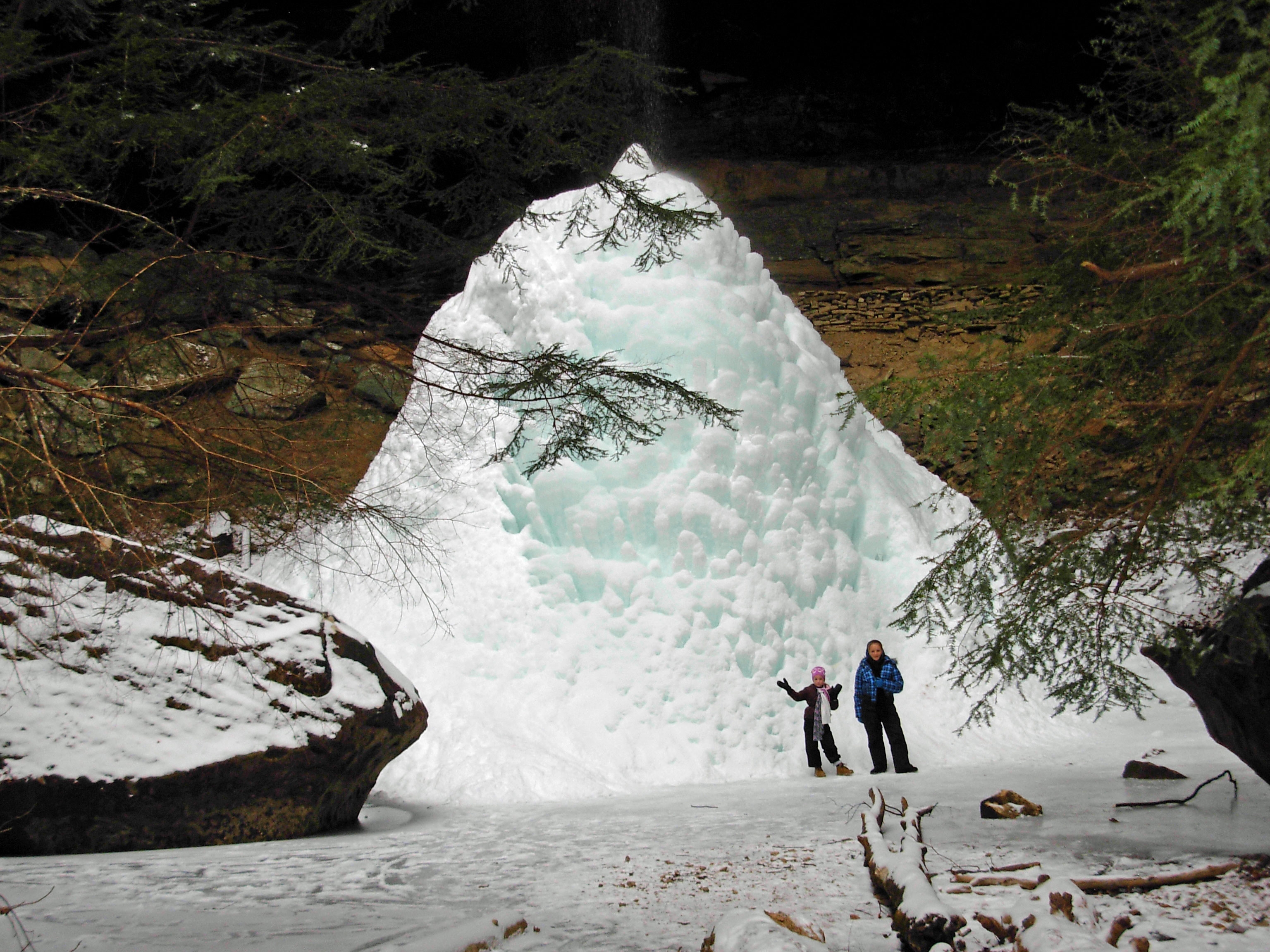 At 113 ft. in height, Yahoo Falls is the tallest waterfall in the state of Kentucky. It is located on the northern side of the Big South Fork NRRA. The waterfall is enhanced by the gigantic rock shelter behind it, and the trail leading to it is a 1-mile loop trail that is rated easy in difficulty.

Either way, the highlight of the hike is the waterfall, which legend has it was the sight of a Cherokee Indian massacre in the early 19th century. This was the home of the Doublehead Cherokees, including the legendary — and probably fictitious — Princess Cornblossom.

The best time to hike Yahoo Falls is during the coldest part of the winter months. If you’re lucky enough to catch it after several consecutive days of well-below-freezing temperatures, you’ll be treated to a massive ice sculpture that forms at the base of the falls, a truly magnificent sight.

To access Yahoo Falls, take U.S. Hwy. 27 north to Whitley City, turn onto Ky. Hwy. 700 and travel west for four miles, and follow the signs to the trailhead.